Limo rate specials to Angola, IN

If you do not see the Angola limousine service price for the destination and vehicle type combination you need, please call us +1-312-972-9900 to find out rate and availability. Online Rates are valid one way for Limousine transportation to or from Angola. To book a round trip for transportation from Chicago one needs to create two separate reservations. We offer only private cars (no share rides), from any Chicago airport, reliable and professional chauffeurs, and the newest model vehicles comfort limo BMW, Mercedes, Luxury towncars, SUV vehicles or stretch SUV.

Our limo & car service goes from Chicago O'Hare to 46703 zip code in Angola, IN. This service area benefits from our Angola limousine service, taxi service, car service, shuttle and limo bus to O'Hare airport and Midway airport. Call our transportation specialists at 312-972-9900

Angola, IN to Chicago downtown Loop

Travel distance from Chicago to Angola, Indiana is 165 and travel time 2 hours 53 mins. During peak hours approaching Chicago downtown can be really slow due to heavy traffic. Windy city has a strange habit of generating heavy traffic during a regular day due to a weather as well as at night time due to construction blockages. So if you are planning a limo trip to the loop for a meeting add a dozen of minutes or two on top of this travel time. Just to be safe ;). 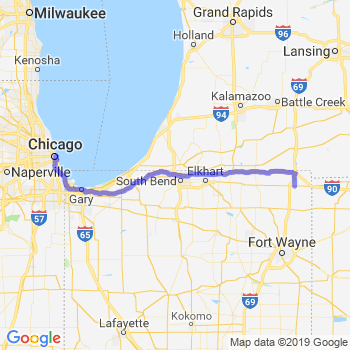 Angola, IN to O'Hare airport (ORD)

Travel distance from O'Hare to Angola, Indiana is 181 travel time 3 hours 12 mins. Please keep in mind that many airlines require to be at the gate at least an hour in advance. International terminal airlines may require even more. Also remember long security check lines. 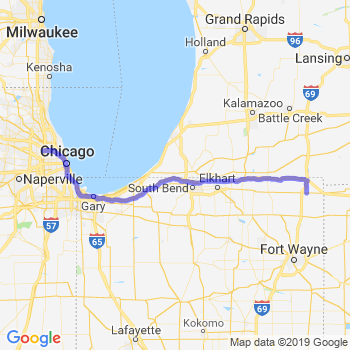 Angola, IN to Midway airport (MDW)

Travel distance from Midway to Angola, Indiana is 164 travel time 2 hours 56 mins. Try to plan arriving at least two hours in advance when ordering a limo from Angola. On top of unexpected road construction delays there may be longer check in lines in the airport as well as long security lines. 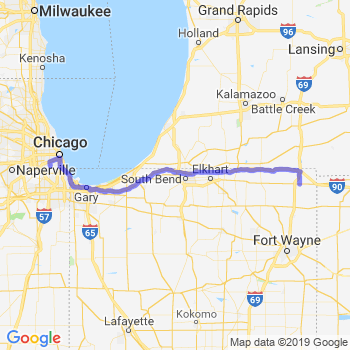 Special prices shown here are available for internet orders only on Angola limousines. Not valid for over the phone or email inquiries. Cars are restricted to maximum occupancy specified. Applicable tolls, taxes and gratuity are NOT included. Fuel surcharge might be added at times of high fuel costs. Night time rates may be higher than shown above. Prices based on availability of Angola limo and may not be available on all days. Surcharges for limousine rides may apply to holidays, special events and convention periods in Angola and vicinity. Prices and rules subject to change without notice, blackout dates and other restrictions may apply.